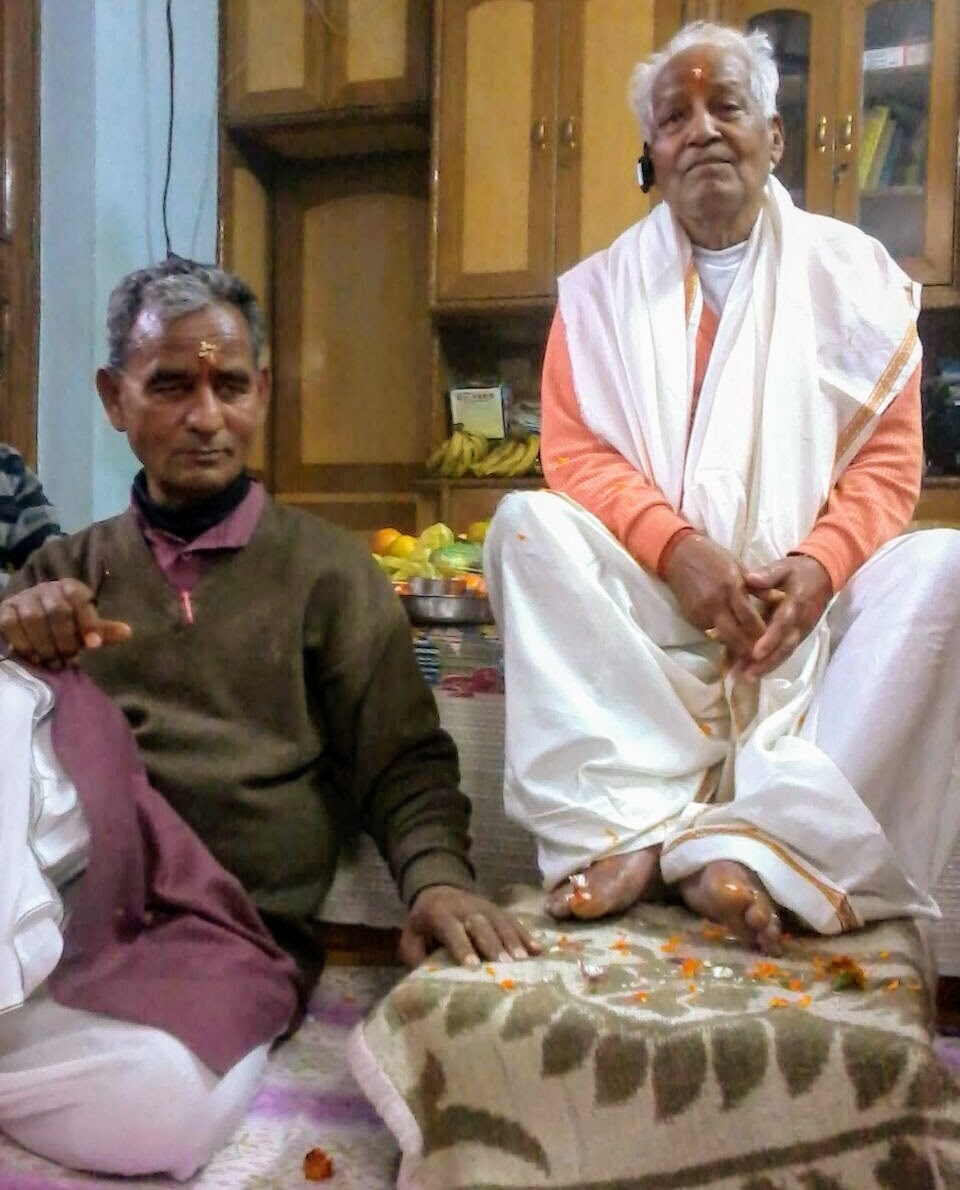 Nardev Kothari as this body was born on December 23,1951 in the village of Jokhani in District Uttarkashi, Uttarpradesh state in North India. Father Sri Abhay Ram Kothari is a famous priest of the area and mother Srimati Soni Devi is a house-wife. Since childhood I was quiet and loner by nature. Therefore, unlike the rest of the family, I lived distantly quiet and alone. I was introspec-tive who examined the thoughts and processes of my innerself. Doing so, I used to end up walking long distance just conversing with myself. When this body grew to 14-15 years of age, I used to see in my dreams one kilometer long snakes seated on both sides of the road which used to spray stream of milk from their hooded fangs in my uppermost plexus (Aagya Chakra). Often a white horse used to carry me in a dense forest, which had only one mango tree under which a penancing saint used to give me a yellow mango fruit. The white horse then reached me back to the place where I slept. I had this dream in my childhood frequently (secret of this dream was revealed after Shaktipat initiation). When I woke up and thought about this dream, I went into meditative state. Because of restraining my passions in previous birth forcibly and sternly, I had to enter married life at an early age of 19. After experiencing family life all this while, I found a Guru at the age of 32 years.

BENEFITS OF SEEING A SAINT :

Famous saint and Yogi of Shaktipat tradition Swami Muktanand Ji Maharaj's principal disciple Sri Praveen Chand Modi was inspirational in my meeting.Sri Devendra Vigyani Ji Maharaj on January 26, 1983 and from first sight I had strong desire to make him my Guru. I provide exact and very relevant description of this meeting as follows :

After depletion of ill deeds and undergoing numerous worldly sufferings, if a human being remains dependent and surrendered to that supreme power, he is sure to meet a Sadguru (able master) for his spiritual upliftment. I met my Sri Gurudev unexpectedly. Before arriving at his place, Vigyan Press, I had pre-conceived notion that Sri Devendra Vigyani Ji must be a head of some institu-tion surrounded by a croud of disciples and saints. How will I be able to see him ? But since Sri Modi Ji was with me, I was patient and hopeful. When we reached Vigyan Press, an elderly gentleman somewhat busy was sitting in an old wooden chair, as if he had been compelled to be there, as I felt. Sri Modi Ji asked him if Sri Devendra Vigyani Ji was there ? Elderly man glanced a bit and asked to be seated. At this Sri Modi Ji offered his adorations to him. Imitating Sri Modi Ji, I also offered my respects in an ordinary manner. When the elderly man glanced at me also asking to take a seat, I felt a rush of electricity passing through me and I sat down like an instrument.

He smilingly saw the book Mahayoga Vigyan which I had in my hands and I was choked with exuberance. I was puzzled about the situation and did not know the person we had come to see from this gentleman who merely by looking at me was causing my whole body to shiver. After a short while my inner conscience (mind) started going in absolute zero and I felt as if there was nothing inside me. I did not even remember where I was. He was having spiritual discussion with Sri Modi Ji and they were talking about the great saint of our Shaktipat tradition, late Sri Dileep Dutt Sharma Upadhyay (reading his biography influenced me tremendously). I came back from my state of zeroness but tears were rolling down from my eyes. I wiped my tears secretly out of embarras-sment. Now I had fully understood that this person was none other than Sri Devendra Vigyni Ji. I saluted him in my owned mind. It was great surprise that he turned back, looked at me and I at once returned to normal state.

Sri Modi Ji had conversed with him for about an hour and during this time I saw many expressions on his face (his face gleamed with divinity like Lord Shiva himself was seated in him). His lit and shining forehead was worth watching. Goddess saraswati was in his speech. Once I saw his body to be very heavy. I was amazed but during this time he did not talk to me. I was listening to him with rapt attention. While departing, I offered respect in courtesyand while going through the motion of closing the door, he asked, where do you live ? I work in Tourism Department, I said and as I wished to say something while continuing to look at his face lit with divinity, he said Don't you recognize me ? As he uttered these words, I felt a jolt of electricity and in a very short while I felt that something went out from within me (migration and exit of divine power, a practical example of induction of Shaktipat and its retrenchment).

I saw Sri Modi Ji off and came back home. I was trying to go to sleep alone in my room that Sri Devendra Ji Vigyani's (now my Sri Gurudev) speech started resonating in my heart and mind. Constantly his forehead, face lit with divinity, Lord Shiva like eyes and gestures (which were attracting me to lay in his feet in adoration) started bubbling up in my mind. Even then I managed to go to sleep thinking about him. I had hardly slept for an hour when I felt jolted in my dream and I removed my bed cover. On the bed itself I sat up in lotus posture. I experienced various bodily movements, smelled divine fragrances and visualized divine universe. I saw that Gurudev was standing in the air, I was scared a bit but how blessed I was that the instructions came stay quiet and let whatever happens take its course. I thought this person is a Sidha (with divine supernatural powers).Then I thought that Sidhas are saints and Sannyasins, they live in Ashrams (Spiritual Institutions). My bodily movements were continuing. I then received instruction, Lord Krishna was God but He had family, so was Lord Rama. I got this inspiration but felt it was coming from him.Then I do not know when I fell asleep.

February 7, 1983 was a great day in my life when I arrived at Vigyan Press at 7.30 a.m. I had taken some fruits with me in accordance with the Shastra (holy scripture). I had gone to meet this great man who had achieved self-realization. Sri Vigyani Ji asked if had come for some business. I placed three apples in front of him and requested him to give me Shaktipat Initiation. It was my good deeds of the previous birth that I could utter such serious words effortlessly. Gurudev smiled, glanced at me in a divine manner and said, I see Shaktipat bubbling up in your eyes. I remember you came with Sri Modi Ji. In our Shaktipat tradition Swami Shivom Tirth Ji Maharaj is seated as Guru. He performs initiations. He will be back from USA in March and I will ask him to give you initiation

Then I described to my Gurudev all my experiences from January 27 to February 5, briefly and said demandingly Initiate me today itself. I will receive imitation from you. At that time I believed that the figure of 7 was lucky for me and it was February 7, 1983. Will you coerce me to give initiation ? He said smilingly. I requested again saying Maharaj ! I saw your real self in my first visit itself, how do you say that you don't know much (about me) ? With folded hands I reiterated my request for initiation the same day. He said instructively, Now you must go. He gave me one of the three apples. I had offered him and said, Take this as Prasaad and go. I got out of Vigyan Press instrumentally. I was walking happily in strong spirit. When I reached near Andhra Ashram, I embraced a feeble animal. I felt that animal's pain was my own. I felt identical with it. I saw universal consciousness all around. All folks walking on the road appeared to be none other than me. Where ever I looked, I saw shining divinity. I came back home exuberant, described it all to my wife and told her You also go to have Darshan of this great man. You will see the Goddess you have been worshipping for so many years.

In this manner for about three month I was tested and appraised before my Gurudev obliged by giving me and my wife Shaktipat Initiation in accordance with scriptures. On the second day of Navratri dated April 15, 1983 after this for three years I had practical experiences as described in the book MAHAYOGA VIGYAN. By his grace and based on these experiences, I am committed to make these experiences ever lasting and profound. This was my real (spiritual) birth : my true encounter with my Guru.

After about 12 years of Sadhana in the year 1995, Sri Gurudev accorded to me the rights to perform Shaktipat initiation. So far I have initiated only finger-count persons due to special spiritual reasons and circums-tances. I believe that those great souls who have realized themselves to be beyond this physical body and stay in universal consciousness are free from the limitations posed by scriptures because they possess the power of rendering anybody worthy of Shaktipat initiation by their mere will-power and divine vision. In my opinion, one must earn the spiritual status and capabilities to become a real Guru. It cannot just be conferred upon somebody.

This is specially extremely important in Shaktipat tradition. I have experienced during past 20, 22 years that any Guru or disciple using this divine cult for worldly purposes like money, name and fame or any other materialistic gain, is sure to suffer the deterioration of the divine qualities and such initiations by him will be fruitless. A Guru shouild not abondon any genuine aspirant. He should try to purify the mind and consciense of such aspirant and initiate him. This science should not be disclosed to a phony or pretending seeker. Guru must be a competent judge for the worthiness of the disciple.